Gomorrah is the title Roberto Saviano chose for his well-known book on the Camorra, the network of criminal organisations that have dominated Naples and Italy’s Campania region for generations. A revelatory choice. Gomorrah and Camorra sound alike. And are alike. The land of the Camorra is a lost place, ruined by greed, hubris, and the vilest excesses. A Biblical place. A place of the damned. 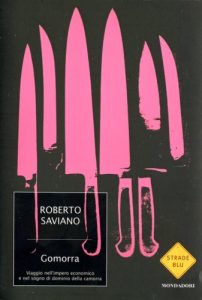 In Gomorrah, the difference between right and wrong is not all that easy to make out. Take Campania’s garments industry. As Saviano, writing in 2006, describes it, thousands of tiny factories in and around people’s homes, all of them under the direction of the Camorra, manufacture clothing for Italy’s prestigious fashion houses. At the same time, they produce bootleg versions of the produce – aided and abetted by the fashion houses. Apart from a reliable supply of cheap and efficient labour, the brand owners derive a significant marketing advantage. The bootleg articles, because they are made by the same people who make the legitimate goods, and using the same designs and materials, are not of inferior quality. Often, they are sold in market segments in which the fashion houses have no wish to compete. Instead of causing damage to the brands, the technically illegal activities of the Camorra factories provide a welcome enhancement.

In Gomorrah, organised crime celebrates itself with brazen openness – and reveals its utter futility. The so-called ‘triangle of death’ between Acerra, Nola and Mariglioano, home to over 500,000 people, and traditionally under the control of the Camorra, is a vast illegal dump. Hazardous materials, including asbestos, dioxins and contaminated medical waste, are delivered from all over Italy and beyond, to end up in unsafe landfills or simply by the side of the road. This traditionally agricultural area, famous for buffalo milk and mozarella cheese, has suffered serious contamination of its soil and water. Cancer illnesses are on the rise – and camorristi are as much at risk as everyone else. Fabulously wealthy, the bosses erect sumptious villas for themselves. But they can’t live in them. They spend their days in cement bunkers or holes in the ground, on the run from the police. Their lives are short, and are likely to end in a hail of bullets from a family member or a trusted friend.

In Gomorrah, the clans have comparitively few members, but these few make use of large numbers of ordinary people, who are terrorised, cajoled or bribed into giving active or passive support. The inhabitants might generally welcome an end to the violence and lawlessness, were it ever to come, but they value the social benefits the Camorra, rather cynically, have been providing for them. The clans keep the peace in places where the police do not venture. They offer low-interest loans to people whom the legitimate banks have turned away. They give regular and secure employment in places where jobs are scarce. Certainly, the population of Casal di Principe or Scampia have little reason to believe that if organised crime were to vanish from their streets, the State authorities would suddenly arrive in the area and do their job well.

Gomorrah is everywhere. The Camorra merely practice a purer version, an archetype, of the self-interest by which many of us choose to live. The management structures and the business strategies behind the clans’ operations are the same as those of many a legitimate enterprise, just better focused and more profitable. Some of the younger bosses have discovered that there is no need any more to break the law. They have turned themselves into law-abiding and tax-compliant businessmen, who ‘assist’ politicians in framing the laws in the way that suits them.

Which leaves the violence. Law-abiding businesses don’t threaten people and kill them, surely? But many of them do just that. Or permit it to be done. Consider the history of Chiquita Brands, formerly the American-owned United Fruit Company, which is chosen here for illustration. The human rights violations associated with this enterprise give the flavour of where the profit motive can lead: to Gomorrah, namely. According to  Hunter T. Carter*, Chiquita’s banana cultivation in the Santa Marta and Urabá regions of Honduras, which by 2003 had become the company’s most profitable operation worldwide, relied on a paramilitary group, the AUC, to maintain order. The AUC is known for the beating and killing of uncooperative farmers, the infiltration of trade unions and the assassination of recalcitrant union leaders. At the same time as it was providing security for Chiquita, the AUC was smuggling weapons and drugs between Europe and South America. For some of its illegal activities, the AUC was able to use Chiquita port facilities and Chiquita ships.

Back now to the Camorra. Thankfully, their evil has met with spirited opposition. There have been politicians, magistrates and police officers who stood up to the clans, often at great personal cost. The Catholic Church, too, has had its heroes. Let me mention three of them: Father Giuseppe Diana of Casal di Principe, Father Aniello Manganiello of Scampia and Bishop Antonio Riboldi of Acerra. Casal di Principe, Scampia and Acerra are poor localities and Camorra strongholds. Father Diana, known locally as Don Peppino, became so fed up with the Camorra that he denied camorristi the Catholic sacraments and began to expose their extortion rackets. He was gunned down inside his church in 1994. Father Manganiello used educational measures to try to protect the young people of his parish from being seduced into crime. But when he denounced the Camorra and their political enablers on national television, he was shunned by his parishioners and then transferred away by his ecclesiastical superiors. While the two priests chose the means of social activism, Bishop Riboldi preferred to work more quietly and to stay within more narrow pastoral boundaries. Perhaps for this reason, the bishop was never a threat to the business activities of the clans and remained relatively safe all his life. The Camorra, it seems, do not care very much if a bishop chides them for their immorality, but they are enormously concerned over any disruption of their money-making.

Saviano’s Gomorrah is a memorable book, well-researched and outspoken. A strong moral indignation, fuelled by heartbreak and an angry contempt for the clans, runs through the writing. Among the highlights are the long litanies of personal affliction. Much praised by reviewers, these hold in the reader’s mind the horrors described and convey their enormity, using the feelings and judgments of an ordinary local man, such as Saviano presents himself to be.

Here, Saviano writes as a witness to evil. But one cannot help wondering, does it ring true?

Saviano’s method is to observe the evil and examine how it works. He studies the personalities, the strategies, structures and instruments, and exposes as much as he can. There is nothing the Camorra fear more, he argues, than public scrutiny, for then the romantic legend is stripped away and the camorristi stand revealed as the ugly psychopaths that they are. But, for the sake of his researches, Saviano participated to an extent in Camorra activities, feigning loyalty to get insiders to talk to him and show him things which are normally kept hidden. Accordingly, his cries of affliction, because they lack innocence, fall short of authenticity. Saviano, stricken as he is by the evil, is made weak by it, deprived of hope, and with him his readers.

Those great witnesses of the Judaeo-Christian tradition, the prophets of the Bible, leave a very different impression. The Book of Jeremiah recounts horrors as frightful as the Camorra’s and affliction as crippling as Saviano’s. But where Saviano shows merely how powerful the thugs of the Camorra are, how interesting, and, in their way, impressive, Jeremiah uncovers the banal and unimpressive root of evil in the individual person. At the same time, we are inspired by his shining belief that evil can be overcome, right there where it begins, in the disordered mind and heart.

Perhaps, amid all the horror, a simple lesson is overlooked: if one takes from evil the satisfaction of a desire, even if it is only the desire to see and understand, evil is left unchallenged, and one succumbs to its fascination. Then, the act of witness, however courageous, becomes one further tool which evil can use for its circulation.