Markus Wolf was the legendary head of the Hauptverwaltung Aufklärung (HVA), the East German foreign intelligence service. The HVA was much better at its work than its West German counterpart, the Bundesnachrichtendienst (BND). Intelligence gathering by the BND in East Germany was of persistently low quality and rarely went beyond what anybody could have read in the newspapers. The reason is simple. Markus Wolf had inflitrated the BND so effectively that much of its activity was steered from the HVA. 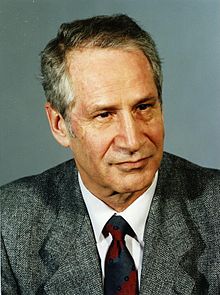 Wolf’s successes, naturally enough, were well hidden. Not until after the collapse of East Germany in 1989, could their true significance come to light. Everywhere that mattered, agents of the HVA had been burrowing away productively. West German political parties, commercial enterprises, trade unions, the police and the armed forces, the different security services, even artists’ networks, sports clubs and terrorist organisations, had been penetrated, sometimes at the highest levels.

In 1987, General Wolf stood down, to widespread surprise. His superiors cited health reasons. Others pointed to a vengeful ex-wife and to the complications she posed for security. Wolf himself claimed a pressing need to write a book. His fictionalised memoir, Die Troika, duly appeared in 1989. It tells the story of two Germans and an American who went to school together in Moscow in the 1930s and whose lives took different directions after 1939. Unusually, Die Troika was published simultaneously in West and East Germany. Bravely critical of the Communist past, it was widely seen as a call for a reform of the East German regime. Vic Fischer, one of the three boys portrayed in the book, and later an American academic, took issue with its nimbus of veracity. Wolf, he claimed, had altered important details of people and events for the sake of a political message. For Wolf, the truth was a tool to be re-calibrated as required.

The heady days of October 1989 put Markus Wolf on centre stage. Ordinary East Germans, tired of the contradiction between Communist ideals and the dysfunctional reality, had taken to the streets in protest, and Wolf appeared in public to argue for an end to the sclerotic political structures. Wolf always denied holding political ambitions. But with his impeccable Communist pedigree, now augmented with the credentials of the visionary reformer, he was the perfect leader-in-waiting. He could have become an East German version of Gorbachev.

History chose otherwise. East Germany merged with the capitalist West, and Wolf fled to Moscow. When the Soviet Union collapsed, he returned to Germany, where he was promptly arrested. The new and enlarged Federal Republic was eager to avenge itself for the shame of losing the espionage battles of the Cold War, and Wolf was dragged before the courts in a number of show trials. He fought his corner ably, and avoided prison.

Then came the books and TV appearances. His tussles with his boss, Mielke, the boorish Minister for State Security, became public knowledge, as did his misgivings about Ulbricht and Honecker, the long-time leaders of Party and State. He professed shock and disappointment at the acts of repression carried out by the regime against its own citizens, even if it was that same Ministry for State Security in which he had been Deputy Minister that had carried out those acts. He claimed to have known nothing about the Berlin Wall until it appeared in front of his eyes. While not completely implausible, these denials suggest that Wolf had chosen not to see and not to hear what was going on around him, somewhat like the mass of Germans under Hitler, who the young Markus Wolf had roundly despised. Unlike the ‘ordinary decent German’ of the 1930s, Wolf was a member of the elite with privileged access to information. If he looked away, he must have known exactly what it was he should not see.

Significantly, Wolf distanced himself from the most spectacular of his Cold War successes, the Guillaume affair, which had precipitated the fall of Chancellor Willy Brandt in 1974. The East Germans had judged Brandt’s policies of rapprochement to be in their interest, and did not want his Chancellorship endangered. Accordingly, Brandt’s resignation was a disaster.

Wolf’s revelations after 1989 are accompanied by an unmistakeable rhetorical slant. Though verifiably factual, his statements tend to be selective and incomplete, and they link up with hardly a disjunction to discourse which is already strongly anchored in the public mind. Consider his account of the secret contacts between the East German regime and the powerful Western socialist politician, Herbert Wehner. Wolf suggests that from the very beginning common ground and continuity of purpose had existed between Wehner and the East German regime. The allegations of collusion with East Berlin and Moscow, which had often been raised against Brandt, Wehner, and others, are thus reinforced, though it is presented by Wolf as high-minded and far-seeing co-operation. This serves to change the picture of who won and who lost the Cold War. Only the rigid Stalinists with their caricature of socialism had been defeated. True socialism, to which the best minds in both Germanies had always aspired to together, remained a pristine ideal and a powerful historical force that was simply biding its time.

Perhaps I am not alone in thinking that the master-spy had never retired, that he was always at work, mixing truth and lies to shape perceptions, in the hope of nudging things in the direction of his choosing.

Until his death in 2006, Wolf never relinquished his claim to moral superiority. His agents had never been spies. Nor had he. They were Kundschafter, a much more positive term, which adds to intelligence gathering the connotation of a pioneer exploring uncharted territory. Not simply that, his agents were Kundschafter des Friedens; that is, pioneers in the service of peace. They were hard-working idealists, whose competence and moral integrity contrasted favourably with the low standards in the Western agencies. For Wolf, the BND, being poorly structured and poorly staffed, was not an enemy to be taken seriously. Its founder and long-time head, Reinhard Gehlen, a former Nazi, was wholly submissive to the CIA, and too preoccupied with his media image to run an effective organisation. CIA stations around the world were run by dangerous zealots who were eminently corruptible. The CIA itself never understood the value of empathy with ideological opponents and remained incapable of the creative analysis that good intelligence work required. As for Markus Wolf, he was a philosopher king surrounded by enlightened personalities. His HVA was a veritable Camelot of espionage. It was they who had preserved world peace and saved mankind from nuclear annihilation.

Wolf’s early retirement in 1987, his reappearance as a ‘loyal dissident’ in 1989, his post-hoc criticisms of the East German regime, his all-too-candid reminiscences, even his spirited defence of jailed former agents, were of the same mould as his 34-year leadership of the HVA: they were elements of a well-crafted intelligence operation. The truth was too important to be left in the care of the capitalist West. General Wolf was a disciple of the utopian march of history, for whose twists and turns the truth must be forward-looking, and serve as an enabler. There was no-one better at its fabrication.