“I wanted only to live the life that was struggling by itself to come out of me. Why was this so very hard?”[1].

Thus reads the motto prepended to Hermann Hesse’s coming-of-age novel, Demian, which was first published in 1919. More a cry than a question, these fervent words must have established for Hesse the central issue of the story. In fact, living that life wasn’t so very hard, at all.

Emil Sinclair, the first-person narrator, grows up in a quiet, prosperous German town, watched over by caring and well-to-do parents. His childhood and early schooldays are exceptionally safe and protected. Danger appears in the form of a local bully, Franz Kromer, who begins to blackmail him. But Sinclair’s torments are soon ended. He is befriended by an older and stronger boy, Max Demian, who drives the bully away. 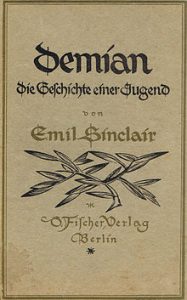 In his religion classes at school, Sinclair is disenchanted by the lifeless explanations of the Bible stories given by his teacher. Along comes Max Demian,  who unlocks fascinating alternative readings. Demian suggests that Sinclair is called to a greater destiny than the herd-like people around them.

Thus begins the path away from conventional life and morality that will supposedly lead Sinclair to himself.

Sent to a boarding school, Sinclair throws in his lot with low-lifers and squanders his time and his parents’ money. Before punishment descends on him, the sight of a local girl, whom he falls in love with from afar, restores him to probity. Not for Sinclair the trouble of getting to know this girl, whom he names Beatrice. Instead, he draws her. Not for him the struggle for a good likeness. As one sketch follows another, Sinclair discovers that his mismatches amount to a significant achievement: out of the features of Beatrice, he has created a figure that looks like both Max Demian and Sinclair himself.

Another drawing, which depicts a bird breaking out of an egg, precipitates Sinclair’s introduction to Abraxas, the presiding deity of the novel. Sinclair does not have to wait very long or do very much to receive the benefits of this new ‘God’. A failed priest, Pistorius, who happens to be knowledgable about  Abraxas, turns up at the right moment, and immediately, Sinclair receives instruction. No arduous spiritual training is necessary. It is enough if he picks up a few scraps of knowledge and plays around a little with esoteric techniques.

Sinclair enrols at university, but he does not bother to study very much. His focus is again on Max Demian. Demian introduces Sinclair to his mother, Frau Eva. Not for Sinclair the everyday uncertainties of a personal encounter. Frau Eva is already deeply familiar to him, and of the very greatest importance. Hers is the face of the androgynous mother-beloved he had earlier dreamed of and had made a drawing of. Frau Eva proves to be the guiding spirit of a circle of the elect, who, needless to say, welcome Sinclair with open arms. Their conviction of the need for a calamitous event for the cleansing of Europe he adopts without a single critical thought.

War breaks out, and Sinclair is sent to the front, where he is badly wounded. He regains consciousnesses and finds Max Demian lying next to him. Demian, who is also wounded, does not waste words on lost lives and mutilated bodies. He holds forth on the dawn of a new age and gives Sinclair a kiss, which he says is from Frau Eva. Then, Demian dies, or appears to die. The reader cannot be certain. In any case, the loss of his daemonic friend and mentor does not leave Sinclair prostrate with grief. Quite the opposite. Demian is now inside him, and Sinclair has become a being of a new and special quality. He has become himself.

If the coming-of-age described here is hard, Emil Sinclair, and behind him, Hermann Hesse, cannot have known much about hardship. This path to oneself is clothed with a blessed inevitability. Struggles may occur, but the actual struggling takes place in the background. Dangers may be overcome, but they are not experienced. Thresholds loom, but they are crossed all too easily. The horrors of war seem to be present to Sinclair, but for all the meaning this has, the war could well have happened somewhere else and to someone else. At the significant junctures of his story, Sinclair does not have to take responsibility. It is never demanded of him that he face hardship and come through.

One might object that the novel foregrounds a different kind of hardship, namely the hardship of psychological crisis. And it is true that Demian emerged from a serious psychological crisis in the life of its author. That this can be hard, I do not doubt. A second objection follows on the first. Demian seems to appeal most strongly to individuals undergoing a crisis of identity, as many do during adolescence. This is valid for the years immediately after the Great War, when the youth of Germany took Demian to heart, as it is for for the English-speaking world of the 1960s and 1970s, when disaffected young people took Hesse to heart once more. That adolescence can be hard, and that specifically adolescent challenges can be recognised in the story of Emil Sinclair, need not be doubted, either.

There is a third objection. Hesse’s novel can be said to be about a ‘higher self’, the search for which is pre-eminently spiritual, and entails a rare, spiritual kind of hardship. It is true that Sinclair’s path includes the abandonment of the collective sources of meaning inherited from religion and culture. It is also true that this abandonment goes hand in hand with the anguish of solitude and with unprotected exposure to the images of the soul. There is a clear risk of insanity, which can indeed be called “so very hard”. But nothing is gained from it. Sinclair’s ‘higher self’ expires on the battlefield, without proving itself in any way, not even in the apocalyptic terms claimed by the novel. One wonders if the life that struggled to come out of Emil Sinclair deserves to be called life, at all.

It is remarkable how strong a claim Hesse made for the truth of Demian. Siegfried Unseld, who was Hesse’s publisher after 1945, relates that when the author first submitted his manuscript for publication in 1918-19, he pretended that he was doing so on behalf of a first-time author, who was incapacitated and close to death, and whose autobiographical story he had typed up for him. The publisher believed Hesse, and Demian was published under the name of the protagonist, Emil Sinclair [2]. It promptly won a prize for first-time authors, which had to be returned when the real author became known. This subterfuge reveals a strange gap between the alleged truth of the book and the truthfulness of its author. This gap requires explanation.

Admirers of Hesse might object that a gap between truth and truthfulness is central to the author’s work. And indeed, the short story, Die Morgenlandfahrt (1932), which, in some ways, looks back over Hesse’s middle-period, which began with Demian, refers to the difficulties of telling a story in precisely these terms. With the change of artistic approach marked by Demian, Hesse can be said to have embarked on a writerly ‘Journey to the East’ of his own. Such a journey follows the higher law of a circle of initiates which must be kept secret. The journey takes place mostly in the domain of inner experience, which can be put before outsiders only at the cost of credibility. [3] Demian can indeed be read as a novel of initiation in which objective truth is sacrificed for the sake of a subjective truthfulness. Given the destructive conclusion of Demian, in which no sign of hope can be clearly identified, such a reading would do no more than emphasise the futility of the protagonist’s sacrifice, and of the novel as a whole.

In Demian, intense subjectivity, alternative spirituality, multiple realities, and the power of myths and symbols make for a rich anti-authoritarian mix. If it can act as a signpost in a time of disorientation, as it seems to have done for many, Hesse may well have got something right.

However, it is required of a signpost not only that it point, but that it point accurately. From the outset, this novel misleads.

In a series of short contributions, of which this is the first, different aspects of Hesse’s novel will be explored in the hope of getting to the bottom of its peculiar fascination.